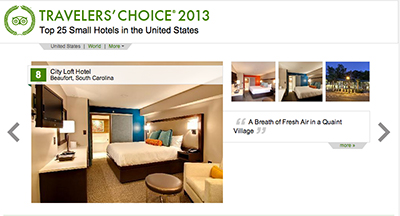 Posted at h in Uncategorized by 0 Comments
0 Likes

Tripadvisor.com, the world’s largest travel website with more than 50 million users, has named Beaufort SC’s City Loft Hotel
one of theTop 25 Hotels for Service in the United States for the second straight year.

City Loft, a 22-room boutique hotel in the heart of downtown Beaufort, is ranked No. 8 on the Tripadvisor listing after being ranked No. 9 in 2012.

The City Loft property has nearly 300 five-star ratings on TripAdvisor and has been mentioned in several publications, including, Southern Living, am New York and the Miami Herald. In addition to being recognized as one of the Top 25 Hotels for Service, City Loft Hotel is ranked No. 1 by Tripadvisor among all Beaufort SC hotels and has received the website’s ‘Certificate of Excellence.’